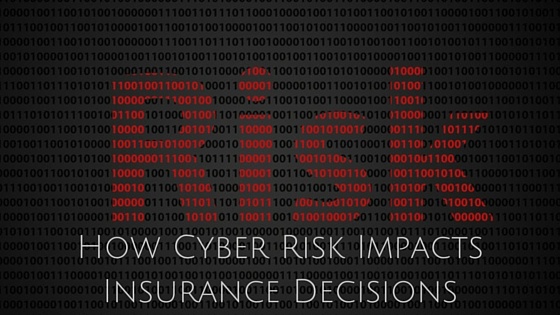 There is a sort of ominous saying that has been passed around IT circles. The saying goes that you either have already had your data breached or you are just still unaware that your data has already been breached. This might seem a bit dramatic, but it also might not be far from the truth for many companies who remain blissfully unaware of the threat of cyber risk.

How Pervasive is Cyber Risk?

With the news of many high-profile data thefts that have made the news lately, it's hard to remain ignorant of the problem. For example, the Poneman Institute recently surveyed almost 600 U.S. companies in over a dozen different industries. About 65 percent of the respondents admitted that they had suffered from a particular type of data breach called a SQL injection. This happens when hackers manage to insert commands into a SQL statement via an insecure input method.

Just as alarming as learning that a majority of these companies admitted to experiencing this one particular kind of data breach is learning that 40 percent of the respondents said it took them over six months to even realize that their data security had even been compromised. After the compromise had been uncovered, it took an average company over two months to fully remediate the problem.

Cyber risk impacts your company's ability to prosper. Hackers can steal your data, ruin your company's reputation, and force your company to spend a lot of money to fix the problem and settle damages. Certainly, part of your company's risk management strategy will be to proactively defend yourself against the threat of having your data stolen or wiped out. This is similar to implementing safety programs to protect your company against physical hazards.

However, it is unlikely that your typical general liability insurance policy really covers you against cyber risks. For example, a Huffington Post Article, "Cyber Insurance vs. General Liability," mentioned a gigantic breach that Sony suffered recently. Hackers stole account data from millions of PlayStation users. The court ruled that Sony's insurance companies did not owe then for damages under their general liability policy because the damage had been done by a third party.

In other words, for their policy to cover the breach, somebody at Sony would have needed to have done the hacking. Sure, Sony's customers might hold the company liable for the release of their private information. But Sony's insurers don't have to pay for damages or defense.

Consider another example. Your company's property insurance may cover your physical computers, storage devices, and other electronics. However, it is not that likely that a traditional property policy covers the actual data contained on those devices.

In any case, cyber risk insurance specifically insures against these new electronic threats that many companies face. In this age of high-profile data breaches, these products will probably get included in the risk management decisions that companies make. Of course, no coverage will replace taking proactive IT security measures.

At Ventiv Technology, our first security measure is ensuring that all of our cloud data is as well protected as is humanly possible. You can learn more about RISCloud to see why our efforts are unmatched in our industry.

Everything is connected: The Internet of Things

Be in control of your cyber insurance costs: Improve your data protection practices

Now is the time to manage your cyber risk